HOW AN INCREASE IN MINIMUM WAGE IMPACTS YOUR SUPPLY CHAIN With the upcoming Presidential Election, there are many topics affecting business being debated. One of the most concerning issues for business owners is the potential increase in minimum wage.

Currently, the nation’s federal hourly minimum wage is $7.25, but some states have already raised their minimum wage above that rate. The common argument is that minimum wage hasn’t been adequately adjusted to the rise in inflation since the previous minimum wage increase.

The hourly rate that most proponents agree on is $15 – virtually double the current federal minimum wage. Although some cities have taken their own measures to implement this higher minimum wage, most haven’t, and it can have a tremendous effect on business costs throughout the supply chain.

The movement to raise federal minimum wages has built traction recently. Washington D.C. and 17 states across the country have already raised wages at the beginning of 2016. An additional 11 states have already made plans to raise their minimum wages within the next five years.

In fact, Seattle and San Francisco have even passed laws stating their minimum wage will increase gradually to $15 per hour in 2018 – Los Angeles is set to hit $15 per hour by 2020. New York City and other major cities are following along, as well.

THE REAL COST OF AN INCREASE IN MINIMUM WAGE

To bring these wages into context, the average U.S. warehouse worker earns a wage of $11.82 per hour, which is above the federal minimum wage of $7.25. However, in some important industrial markets, such as Southern California, the gap between minimum wage and average warehouse wages is narrow.

Many of those key markets are on pace to raise minimum wages above the $11.82 that the average industrial employee earns. In addition to raising labor costs in one area of business, minimum wage increases tend to increase wages higher in the pay scale.

That represents a “37% increase from the average annual U.S. industrial rent of $5.65 per square foot per year.”

WHO IS AFFECTED BY AN INCREASE IN MINIMUM WAGE?

CBRE’s Executive Managing Director of Industrial & Logistics, the Americas, Scott Marshall, had the following to say about minimum wage and labor costs:

“While minimum-wage increases are varied across the U.S., and some municipalities aren’t considering any changes, industrial real estate occupiers still need to be aware of the impacts of higher wages on their labor and overall occupancy costs. Labor typically accounts for 20 percent of supply chain expenses, so changes in that category can reverberate across the entire enterprise.”

It’s inevitable that minimum wages will increase and when the time comes, many industrial companies will choose to pass those cost increases to their customers. On the other hand, some businesses will look to cut costs from other areas of their operation.

Industrial companies are relying more on EDI software providers, cloud technology, and business automation software to run lean and efficient supply chains. Technology has not only replaced numerous processes that previously required manual labor, but they’ve dramatically increased the speed at which companies can operate.

In addition to investing in technology, many companies will opt to be more flexible with the locations where they operate. Cities and/or states that restrict minimum wage increases will be intriguing for businesses scouting the location for their warehouses and other industrial property.

However, there are issues with moving to low-wage cities. The same metroplexes that have the most resources and the best locations for shipping products to customers in the quickest amount of time are the same areas that are fighting the hardest to increase wages.

When asked about which industries will be impacted the most by increased wages, Spencer Levy, Head of Research for CBRE in the Americas, had the following to say:

“While the impact of rising minimum wages will vary across companies and the states and municipalities in which they operate, it’s a near certainty that e-commerce facilities will take the biggest hit. Fulfillment centers and other facilities that process, sort and ship online orders tend to employ twice as many people on average as do typical warehouses and distribution centers, often expanding during peak seasons to as many as four times the average workforce.”

Some business costs are difficult to avoid, and others can be reduced dramatically. If your business isn’t already using EDI in your supply chain, you could be missing out on thousands of dollars in savings.

BOLD VAN offers a variety of EDI solutions. From cloud-based to full EDI system implementation, we’ve got the right solution for you. Speak to an EDI Solutions Specialist today  844-265-3777. 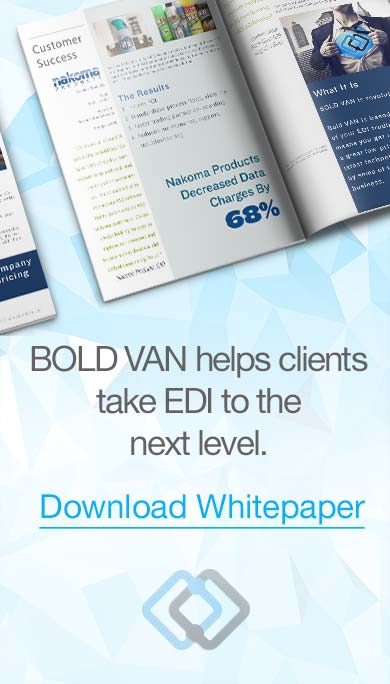